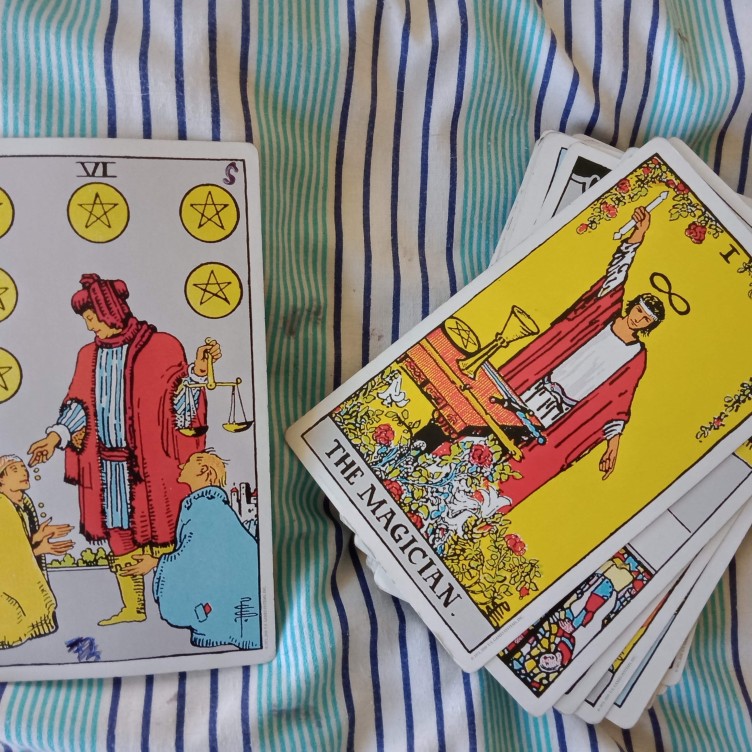 I – The Magus of Power

I’ll address our shadow card first today, as The Magician and I have had a rocky relationship right from my Tarot beginnings. Whilst I definitely do not believe in ‘good’ or ‘bad’ cards within Tarot, this first card of the Major Arcana, the mercurial original manifester, still makes my stomach flip when I turn over The Magician card.

With enormous power comes enormous responsibility, and the elastically mercurial cunning of The Magician is far too easily influenced. This is my Trickster card, and even when The Magician adopts a magnanimous attitude, do not turn your back! This Magus cannot be trusted. The Magicians’ intelligent and powerful, electric energy is easily corrupted. Mercury represents action in all forms and phases, so our busy Magician never sleeps.

The Magician is masculine, he’s Yang, is active, confident, mental, thinking and brain-waves, and he deals with all things electronic i.e. the internet, e-mail, and sms. He is also highly aggressive, determined, unscrupulous, and is often associated with the Occult, sometimes theft, and always engaged in some element of deceit.

The ‘Reciprocity’ card, named ‘Success’ Crowley Thoth deck, and is the Minor Arcana echo of XI Justice card Tarot Major Arcana. Moon in Taurus,  increasing this cards approach to perfection. This card highlights power balances, and/or inequalities, within all relationships across all suits i.e. many relationships work well unbalanced, or possibly even based upon these imbalances of power, so such revelations revealed by the Six Pentacles (6P), are not always unwelcome, or even alarming. The workplace would be a good example, and their hierarchies and various positions of employ, holding varying levels of power. Cards surrounding 6P will provide this information.

All number sixes are associated with Ego, sixes are balancing, and restore harmony after the five’s expansive disturbance.  Sixes notoriously celebrate despite being possibly, and stubbornly unbalanced, a tad little bit heavier either side of the scales, due to the volatility associated with attempted taming of the fragile human Ego (real or perceived). Six is the second celebratory number, and generally a time out is recommended, and was earnt, in achieving this second level of harmony within the Pentacles suit. The exchange shown in the 6P, always involves both giving and receiving. This 6P exchange reaches beyond it’s Pentacle home suit of security, extending to gaining attention, giving and receiving respect, and getting what is deserved (either way).

Phrases associated with Six Pentacles: ‘Gifts with strings attached.’  ‘It is better to give than to receive.’ ‘Give with discretion, accept with memory.’ ‘Inner reflecting outer.’

Phrases to Consider for both cards:

“He pays them what they’re worth” “Doing the right thing” “making payments” “he starts paying attention” “You’re doing it, and receiving the attention you deserve” “Pays off, making the first move” and so on and so forth.

Once The Magician activates, he manifests so powerfully into his desired Minors suit, delivering the Ace (raw full potential of the suit), he bypasses all Major Arcana,  and is completely elementally focused. He harnesses raw energies from the Gods above, being a conduit from the Heavens, then releases these energies here within our earthly realm.

People question why I always attribute a healthy dose of mistrust to The Magician? THe image of this card (RWS) shows a very young (teenager?) and authoritative Magician with all his tools at hand. He wears white clothing (purity and innocence) and a red robe (confidence and authority), and the problem that arise from this innocence combined authority is the absolute mayhem that can be created because of the raw and absolute power that this Magician weilds. Reversed or upright, this over-confident, and willful mischief maker (at best) simply cannot help himself!

When we consider the world around us, that we all individually have created using the Magician within, have our inner Magicians’ manifested Devine powers responsibly? Does your inner world reflect the world currently around you (6P)? Or is their possibility of corruption of these powers?

This site uses Akismet to reduce spam. Learn how your comment data is processed.